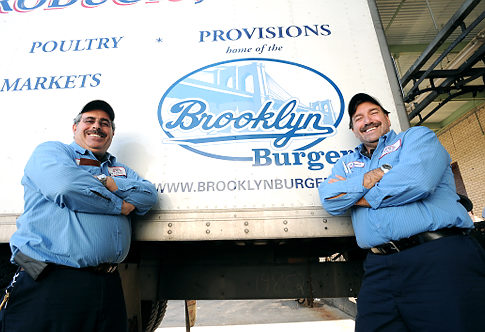 But they are not in Brooklyn anymore. It only says "Brooklyn" and it shows the Brooklyn Bridge in the background. What's the problem?


More than 50 years after the Dodgers left Brooklyn, dem Bums are trying to break the borough's spirit yet again.
The Los Angeles team is picking on a local hamburger vendor for using an iconic "Brooklyn" design in its logo.
The latest slight by the baseball club that infamously bolted New York after the 1957 season is giving Brooklynites a brand-new reason to curse the traitors.
And none more than Alan Buxbaum, the furious owner of Brooklyn Burger.
His shop's logo features the classic cursive "Brooklyn" lettering made famous by the Dodgers, with a shot of the Brooklyn Bridge in the background.
Buxbaum was approved for a trademark in April, and all was well until the Dodgers filed an official complaint with the U.S. Patent and Trademark Office last week .
"There is no Brooklyn Dodgers; they don't exist anymore. They left Brooklyn," fumed the 56-year-old Buxbaum, a proud son of Midwood. "You can't keep everything forever."
A team lawyer griped that the Dodgers own the trademark and insisted Buxbaum's logo could lure his customers into thinking the product is actually made by the baseball club.
Buxbaum's lawyer called that argument ridiculous and added the Dodgers' trademark covers only apparel, not food.
"People who see [Buxbaum's logo] in Brooklyn aren't going to think the Brooklyn Dodgers are selling hamburgers," said lawyer Robert Maldonado. "It's crazy for the Los Angeles Dodgers to claim exclusive rights to the word 'Brooklyn' when they left Brooklyn 50 years ago."
Posted by Roberto Baly at 10:00 AM