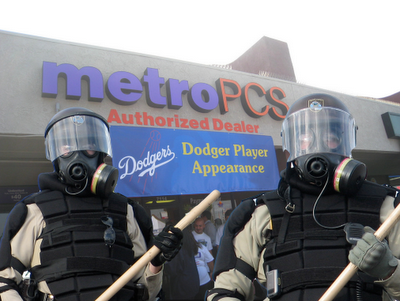 I got many responses from my post of last Friday on the appearance that James Loney did for Metro PCS in Bell. {linked here}

I will publish some of the e-mails here. I did had to cut short on most of them. But you will get the point...

Don't get hurt if you don't see your e-mail. It was too many!


Today I went to the James Loney appearance in Bell. I got there at 9 a.m. and there was a big line already but i really thought i was gonna get in. However, for this one I have no idea why the line wasn't moving at all. Metro Pcs employees said only people who purchased phones were at the front of the line, which totally sucks. I also noticed a lot people cutting in and saving spots for others. After I realized I wasn't going to get in I walked to the front of the store and at least I got to see James Loney leaving. I did see a lot of mad people booing him and giving him the finger, which I consider very inappropriate because it wasn't his fault that not all of us got his autograph. I think the Metro Pcs people would've handled things better to ensure that more people got in but oh well it wasn't meant to be for us the 400 unhappy fans. Waiting four hours in the sun when u r sick is not fun. Thanks for the great job you put into your blog I totally love it.
Ana
E-mail from Camilo:


Hello Roberto,
Firstly, love the blog. Been following for a while, just never bothered to leave a comment or email before.
Regarding the topic at hand, unfortunately I had to arrive a bit late (11am) to the event due to a morning commitment. By the time I arrived with my mom the line stretched down the alley to Bell Ave. By 11:30 the line had looped around to the first couple of houses on Woodward Ave. (see this map for clarification: http://tinyurl.com/389aj7z). The Metro PCS staff coming around were estimating that, by noon, the line was a thousand people long. When asked what time James would arrive and how long he would stay, they said soon (if was 12:15 by this point) and he'd maybe stay until 2. Understandably, the staff people did warn people that James would probably not get to see everybody and that if they wanted a guaranteed autograph, they should buy a phone that enabled them to enter the VIP line. Only a few people ended up going for the offer.
The line progressed, slowly, but it did move. People started to leave, most were content to wait, sharing pizza from Pizza Hut, making Starbucks runs, etc. At 1:30 (I was right behind the car wash at this point) there was a quick surge towards the front of the line and people were saying that he was leaving. Sure enough, he was leaving, which caused more people to run towards the Metro PCS. As his towncar pulled off into the street and onto the red light, people crowded the sidewalk in front of the car wash; some people booed, one kid repeatedly yelled "James Loney sucks," trying to start a chant. I didn't see anyone throw anything though. Once the light turned green James' car busted a u-turn and he was gone. Almost everyone left at the point started walking towards their own cars.
There were lots of disappointed people, but it's not like we didn't know that could happen. I mean, we were let know that he couldn't see everybody. Dude's on a game day schedule, so even then you know his time is tight. Although, had he stayed until 2, as some of the staffers had said, the amount of non-autographees could have dropped to less than a hundred people. Hopefully another time arises so I can get my own bobblehead signed. I agree that this could have been planned a bit better, especially at a bigger location, but hindsight is 20/20. I bet some of those Metro PCS staffers did pretty well on commissions with their VIP line phones sold, though.
E-mail from David:


Just found your blog today. I'm from Fresno, Ca visiting family in OC with my son & daughter.
Me & my 8 yr old boy woke up late & said, "Hey! It's better than chilling or being in Fresno, so let's go" We seen the line & I knew there would be no way for a signature. I told my boy, "How do these people think they will even get to see him standing in this long alley & a block around the corner?"

But we decided to make the best of it by hanging out. My boy had fun throwing the ball and watching Loney come & go - I took some cool pics. It was terrible that many of those standing in the line started yelling, Boo! Boo! Boo!!! Heck, did they really think he would stay there until tonight's game started? I rushed my boy out & taught him the value of the day was to make the best of the situation & to be thankful for being there. As big Dodger fans, he said, "Man dad, that's the closest I ever got to James Loney." I said, "Yeah, did you hear him say thank you when I said, 'Good Luck!'"

First off, love your blog ! =) Thanks for all the time and effort you put in to it . But anywho on to the bad news as I'm sure you have already been told, Loney "fans" were ridiculous after hearing he was done signing autographs. Unfortunately I was right around the corner when he was done and like many I did not get an autograph, but I sure didn't bombard his limo either! Booing began and there was a guy flipping him off literally about to break the window and yelling F bombs left and right. Embarrassing right ? Yea it sucks we didn't get an autograph, but what do you expect he was only there an hour. All I want to know is where all the thank yous are for him setting time aside and signing a few autographs? I was able to see him leave and I waved and he gave me a smile! So i guess you can say I was satisfied lol. But hey there's always a next time.

Well just thought I'd share my experience with you lol Keep up the good work !

Hey Roberto, it's me Tako or Miguel. Well I read your post and I was pretty close to almost going in when Loney left. I don't have any pictures of what happened after but some fans were angry when he left some fans did yell out "F**k Y** Loney!!" but from what I remember there wasn't any fans throwing anything. Since I live close I stayed for a while and the crowd actually dispersed pretty quickly. Since I hung around some of the employees from the Metro PCS store came out giving away Dodger hats from Bank of America and the left over pizza. Obviously I'm still a little frustrated at the fact that I didnt get an autograph. Ohh I noticed on your post that I'm the picture that you took of the crowd in the alley way....I'm the guy coming towards the camera on the right side. Also, the guy in the Mike Piazza jersey was trying to make me give him my Dodgers 50th Anniversary pin he showed me his album and told me he has a collection of about 700 Dodger pins and before i forget here's the link to my tumblr: http://takothinksblue.tumblr.com Hope to see you around at the Stadium and future player appearances!!


I was on your website, like I always am. I was reading your post on the James Loney Appearance and I was there when he was leaving. It was so sad. People threw water bottles at him. They were so upset. I was angry at the fact that some people were booing him and cursing at him so i yelled out loud "leave the poor guy alone! like it's HIS fault you guys arrived too late and didn't get his autograph. The man's on a schedule too!!" When his limo passed by, I wasnt afraid to give him thumbs up. Loney's an awesome guy. People are just ridiculous sometimes.
Thanks. -Janet
Thanks everyone!
Posted by Roberto Baly at 6:00 PM