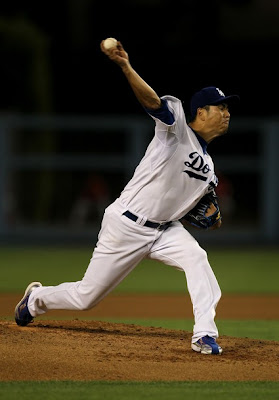 Hiroki Kuroda was amazing tonight. He was pitching against the Philadelphia Phillies. A team that is full of All-Stars and power hitters.

Rollins, Utley, Polanco, Howard, Werth, Ibanez, Victorino and Ruiz. You see, a team full of All-Stars. He didn't get the No-Hitter but it was still a great outing. Kuroda went out and pitched 7 and 2/3 innings while giving up only one hit.

For a couple of hours, Kuroda made us forget about the McCourt divorce case and the drama of Man-Ram's trade.

And how about Hong-Chih Kuo? Another stellar performance. People laugh at me when I say that Kuo is the MVP of this team. But I mean it, he's the MVP this season for the Dodgers.

I'm so happy for Rod Barajas. Playing at Dodger Stadium for the first time as a Dodger and he hits a Home Run. He grew up in Norwalk and his family made the trip to Dodger Stadium a couple of times per season. I can just imagine he had a lot of friends and family members at the park tonight.