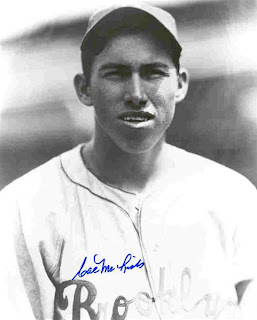 Yeah, that's his name. Calvin Coolidge Julius Caesar Tuskahoma McClish. Better known as Cal McLish passed away last week. Pitched for the Brooklyn Dodgers in 1944 and 1945. Went on to have a long career with different teams. Got a save in the 1959 All-Star game for the American League while pitching for the Cleveland Indians.

From the NY Examiner. {linked here}

The owner of the longest full name in baseball history, Calvin Coolidge Julius Caesar Tuskahoma McLish passed away Thursday morning at the age of 84.

Cal McLish made his debut in 1944 at the tender age of 18 with the Brooklyn Dodgers during World War II straight out of Central High School in Oklahoma City. He would miss the subsequent season due to his own military service and would later go on to play 15 seasons in the majors with six additional teams, the Cleveland Indians, Philadelphia Phillies, Pittsburgh Pirates, Chicago Cubs, Cincinnati Reds and Chicago White Sox. He appeared in the 1959 All-Star game where he earned a save, pitching the final two scoreless innings for the victorious American League squad.
How about that? The longest name in baseball history. Rest in peace Cal.
Posted by Roberto Baly at 10:00 AM