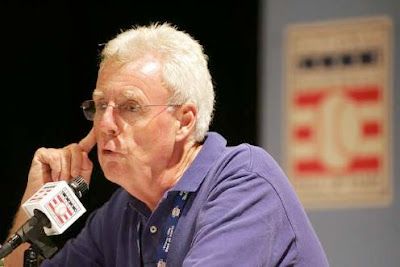 How do you like that title? Rumors, rumors, rumors. I hate it. We got about 2 more weeks before the trading deadline. And I'm sure we will be reading some crazy stuff involving the Dodgers.

Peter Gammons was a guest on WEEI in Boston and when asked about Jayson Werth trade rumors to the Red Sox, he said the following:

The one team I keep wondering about if they drop a few games back, if the Dodgers start dropping back, would they talk about Andre Ethier. He’s going to make $10-$12 million next year, the coaching staff feels with their bizarre ownership situation, they don’t want to pay Ethier and might trade him now. That would be a fascinating guy to go after.”

Is Gammons okay? This is some crazy talk right here. First of all, I don't see the Dodgers falling apart by the end of July. Second, $10 million  bucks next year, are the Dodgers really suffering to pay Ethier that amount? My last point, Ethier is the best player on the team. You have to agree with that. Why would the Dodgers trade away one of their best hitters? It would be a huge blow to the team and fans. It just doesn't make sense.

Just be careful at the things you're reading. We are going to be reading so much stuff until July 31.

I respect Gammons. He's a Hall of Famer, a great writer but I don't buy his story.

Meh. Typical Gammons. He always comes up with some way off the wall trade scenario almost every year at this time and they rarely pan out. I respect him too, great baseball man, but sometimes I think he shouldn't say half of the things he thinks.

I don't remember his contract being for 10 mil next year.

This is Gammons' wet dream. Not gonna happen.

It's been years since Gammons has breaking news. He has nothing. This is his dream since he's a Red Sox fan. I agree, I don't buy this story.

Don't listen to that mutt. Do not even respect him,Dude. He is a Homer straight up G.

I wouldn't really call this a trade rumor because it is more like Peter Gammon's wishful thinking. It more of his speculation than anything, just an interesting idea he wants to happen for the Red Sox. I also think he doesn't know/forgot Andre signed a 2 year contract, so it hard to think Dodgers' management would give Andre 9.25M contract and not being able to pay it.

Just more rambling from what I take from the interview.

I honestly think that the Dodgers are gonna end up in 3rd or probably 4th place this season. We are asking too much of Kershaw. He has no help! We have a bunch of #3 starters on our squad. I am the biggest dodger fan there is. A true fan who knows his stuff. I am so sick with the way things are right now. I wish the Mccourt's just sell the team. I know Colletti's hands are tied right now, and has no control. This is why Torre hasn't signed any extension. He doesn't want to return to this. I don't want him back anyway, but still... I don't think there is any way the dodgers trade Ethier, Kemp, or Kershaw. I do think they try and might trade Manny. If they do trade Ethier, I don't know what I'll do. We are in LA, not Pittsburgh! Love your blog Roberto, keep up the good work, thanks for letting me vent...

gammons is smoking more pot than me! wtf is he talkin about?!