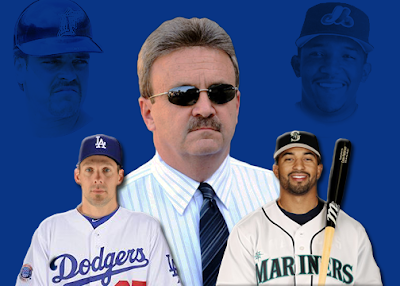 I wasn't going to blog about this. It just gets me upset. But then I see that picture over at The LFP {linked here} and it made me think of the crazy trades the Dodgers have done in my lifetime. Pedro Martinez... Mike Piazza... Matt Kemp!?

Tony Jackson of ESPN L.A. had a chat yesterday afternoon. I tried to get in a couple of questions but they never went in. I guess my questions suck. Or maybe Jackson just wanted to talk about Kemp. {linked here}

Earl: do you think its in the Dodgers' best interest to trade Billz if they can get back a frontline starter off another team?

Jackson: No, I don't think you can get a frontline starting pitcher for Billingsley at this point. I think to do that, the Dodgers would have to part with one of their core players. Matt Kemp has the most value right now because he is locked up contractually through next season. It wouldn't completely shock me -- it would surprise me, but not shock me -- if Kemp is the piece the Dodgers use to get a frontline starter at or near the trading deadline.

Okay, that doesn't surprise me. If you want a frontline pitcher, you have to give up something big. I understand that.

Again from Earl: Wow, if Kemp gets traded for anyone, I would be bummed.Do you feel that would be a big mistake for the Dodgers to trade Kemp for a frontline starter, despite what Colleti thinks about him?I think Colleti exaggerated the issues of Kemp, personally.

Jackson: Earl, I have it on good authority (NOT from Colletti, from others) that if anything, Ned UNDERSTATED the issues with Kemp. This kid is really full of himself, to the point that it is becoming an issue in the clubhouse. I'm not saying they WILL trade him. I still think there is less than a 50-percent chance that they will. I'm just saying that if they do trade one of their core young players, he probably will be the one, not only because of these issues but also because he would have the most value.

Say what? Kemp is full of himself? He's disturbing the clubhouse? Wow, I did not know. Kemp is a cancer! Get him out now!

More on the Earl/Jackson chat:

Earl: Wow, Tony, didn't know that about Kemp. I just don't think you can afford to let a talent like his go. Do you think its just a simple case of immaturity?I mean a lot of ball players start out cocky, but mature and settle down with age. Kemp could be no different.

Jackson: well, if it's immaturity, he has had plenty of time to outgrow it. Based on what I'm told, he hasn't outgrown it yet. None of this is terribly surprising, just judging from the way he handles himself with the media. He is difficult to deal with, and I'm told that isn't limited to the media.

Based on what you've been told? Why do you need someone to tell you? You're there in the clubhouse. You see him. You can tell if someone is a jerk or not. What do you mean the way he handles himself with the media? I've seen him do plenty of interviews and he's always smiling and answering the questions politely. I guess Kemp doesn't like Jackson. Is that the problem?

I like Jackson. I think he's a good reporter and always has good stories but I feel Jackson is just upset with Kemp. Wouldn't someone else in the media report this if Kemp was causing trouble in the clubhouse?

One final thought... I can care less if Kemp is cocky. I want them to think they are the best. If that means he's cocky, so be it! You don't think Ethier is a bit cocky right now? You bet.
Posted by Roberto Baly at 3:00 PM

Sad. I would stop going to games. I'm a huge fan but Colletti is a big idiot.

Nice knowing you Matt! But Colletti will trade you. Sad time in Dodgers history.

I hope not. Who are we going to get? Cliff Lee? Who's going to be a Free-Agent!

Hey guys, don't you think Tony Jackson has been more critical of the Dodgers since he moved to ESPN?

I don't know what trouble Kemp is causing in the clubhouse. I'm positive someone else would've reported this.

@ Fernando - Not really. I'd rather have someone that can report both sides. Even if it's critical. I just don't understand his statements on Kemp. What trouble is he causing?

Jackson does a terrific job in giving us the news. What sucks is that the Dodgers don't have a big media presence like the Yankees. Or else we would know what's going or if it's true that Kemp has issues in the clubhouse

Hell no, Matt can't go. Kemp is a sweetheart. I can't believe he would be disturbing the clubhouse. Colletti better watch his butt, because I'll go after it with a pitchfork.

You bring up a good point Roberto about wanting to know what is really going on. In that book True Blue, it had some behind the scenes stuff from decades ago that was never know. At the Vin Scully charity interview with John Wooden, Scully said if all the facts of the Piazza trade were known it would make sense. We may not know for a long time what is really going on.

Even though it appeared to be handled badly, I didn't think Colletti trashed Kemp by accident or a slip of the tongue. I suspect it was deliberate and planned.

I did think it was odd that at the Dodgers 80s luncheon, when Kirk Gibson spoke he said he worked out in the same place as Kemp and talked to him and it sounded like he was sort of putting Kemp down about a lot of stuff. It was vague but it did seem odd. I've been meaning to post the video I shot so you can see for yourself.

On what I know, I hope they don't trade Kemp. He's not expensive now and he has such a great upside and pitchers are high risk players.

I know i'm chiming in a bit late on this but i did read an article a couple of years ago (early 2007) that Matt Kemp was trade-bait primarily because of his attitude. There was a coach who remained unnamed in the article who said that Kemp was un-coachable and that it posed an issue in for their management style.

As it would turn out, Matt Kemp showed great offensive potential that year and all this talk of him being un-coachable and trade-bait just faded away.

I'm sure all this is just being hashed up right now because of the Colletti issue and the teams woes. I'm a huge MK fan i even bought a BISON t-shirt and i would be upset if they traded him. But assuming that the story does bare some merit, what do you do with a star player who is under-performing,not being a team-player, and un-coachable?

I agree with Romy S. If I'm not mistaken, Matt has done more for the Dodgers off the field than say, Manny. Matt was there to support James Loney's bowling event for the Dodgers Dream foundation and he was promoting the Dodgers at Olvera Street for the Dodgers Caravan back in February. Where was Manny (or Ned)?

Kemp is a good guy. This is just B.S. I wouldn't blame Kemp if he wants out now.

@ Eric - Yeah I do remember that article. I'm not sure if those things are true this season. I don't know what to think. It's hard for me to believe that he's not a team player. He looks like he's having fun out in the field and I seem talking with his teammates all the time. We'll see what happens...

Kemp is literally the nicest athlete I've ever met.

Tony Jackson can get bent.

Can they trade Tony Jackson?

Kemp being a jerk seems so odd to me. Maybe the Dodgers organization is slanting it this way so that, when Matt is traded, they can use the line of "Oh, but Matt was a grade A jerk so it's okay!" to appease the Dodgers fans?

I'm an Indians fan too and trust me, they did this garbage with Cliff Lee, Victor Martinez and others *right* before they traded them; painting them in bad lights. They're doing the same thing this year with Grady Sizemore. It's almost too obvious.

I just can't buy the Matt ego trip thing. I think he *can* be a bit cocky, but not overboard. I don't think a person like Casey Blake, whom he seems close with, would put up with any ego garbage. Blake always seemed to me to be a humble and quiet guy who doesn't take lightly to jerks.

@SingleDaddyof2 Thank you for agreeing with me. I'll grab an extra pitchfork and we can go after Colletti's butt together. LOL