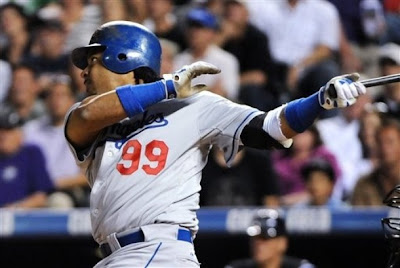 Dodgers 5 Rockies 4
The best moment of the game came when Vin Scully called out on a fan who caught a home run by Clint Barmes. Scully called the fan a "clown"
That was funny. The other clown, Manny Ramirez woke up from a coma, grabbed the oxygen tank and hit a two run homer in the 6th inning. It's his 549th career Home Run. Passing the great Michael Jack Schmidt on the Home Run list.
Carlos Monasterios pitched five innings and only gave up two earned runs. Jonathan Broxton gave us a little scare but was able to get the save.
A couple of other notes...
Photo: AP
Posted by Roberto Baly at 9:14 PM

I was cracking up when Vinny called that guy a clown. But then I felt a little bad for the guy when the usher was removing from the stadium. That's what you get for interfering.

I want to find a picture of Manny with the oxygen tank. I thought that was hilarious.

It's about time they DFA'd Green.

Casey Blake should still be mad at the umps.

Nice to see Dre continuing where he left off.