Joe Torre would like to manage the NY Mets? 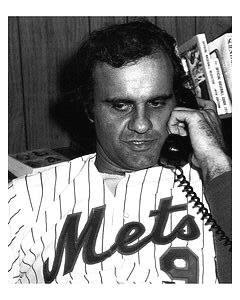 I thought it was odd that Joe Torre and the Dodgers didn't get a contract extension during Spring Training.

I think Torre just wanted to be here for three years and that's it. Then last year he felt he could probably manage a extra year.

Maybe he does want to manage but somewhere else.

It's just speculation and his opinion. But I kinda buy his story. Do you?

The word in Arizona during the spring was that Torre was frustrated at the team failing to retain left-hander Randy Wolf, then doing nothing to fill rotation voids created by the free-agency losses of Wolf and right-hander Jon Garland. Then came reason to wonder if the team finances are about to further tighten because of the ongoing legal battle surrounding the ugly divorce of owner Frank McCourt. And now, Torre is positioning himself to distance himself from the Dodgers.

Torre, who turns 70 on July 18, isn’t making retirement plans. He enjoys managing and he loves the healthy paychecks.

He also has an intriguing option.

He could return to finish his managerial career where he began it – with the New York Mets.

The Mets are in a big mess. I don't know how GM Omar Minaya has stayed so long. But maybe Torre would like to fix that mess.
Posted by Roberto Baly at 10:00 AM

Torre can leave. I don't care. I want a manager that knows how to set up a Pitching staff and a starting lineup!

If Torre wanted to put Padilla out there on Opening Day to send a message to Frank McCourt then Torre can go to hell!

70 years old. Come on, at best Joe has year or two left at a high level. Why would he even begin to consider a job where things are about as bad as they can get and not have time on his side to take care of it. No, Joe will either stay a Dodger or retire. Did I mention 70 years old?