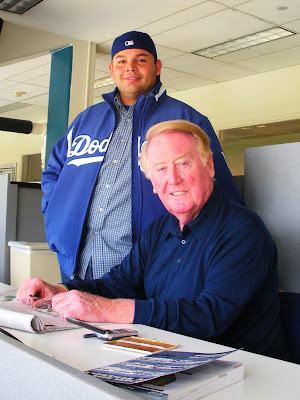 Hey Robert, once again I want to commend you on the great job you do for us Dodger Fans. Here is that pic we were talking about earlier. I'm not one to get star struck but on this day I was a school kid all over again. I have to say that Vin Scully is one of the classiest people I have ever met. This pic was taken by a friend of mine while we were taking a Stadium Tour on the day the team was leaving for Chicago during the playoffs in 2008. As part of the tour, they take you through the press box and low and behold, Vinny just happened to be there reading the paper. He had a nice conversation with us and allowed us to take pics and we were on our way. I've been on several tours since and I've met other players as well, I highly recommend these tours to many of yours readers that may not be aware of them. I know I'll never forget meeting Vinny. Thanks for letting me share.

That's a great story. You just take the stadium tour and Vin Scully is there! Amazing. A picture with Scully at the Press Box. Very nice. Thanks Simon for telling us your story.
Posted by Roberto Baly at 9:00 AM

Me too. Scully is the greatest ever.

I hate u Simon!! lol
you are a very very Lucky man!!

I do consider myself lucky...Vin Scully is a person that I've wanted to meet, but never in my wildest dreams thought I would. I was at the right place at the right time for this one....