"The Dodgers organization is done" 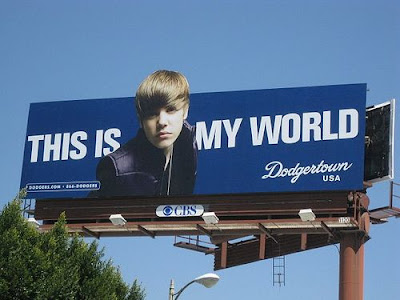 Hello Roberto, you posted a Justin Bieber billboard two or three weeks ago. I have to admit that I don't think Blue fans admired that billboard too much. It was too dark and you couldn't really see Bieber's enthusiasm on being a big Dodgers fan. How about I send you one that is very clear and taken during the day. You guys are done. The Dodgers organization is done. Frank McCourt is done. You are done. You have sold out to Hollywood. Go San Francisco Giants!!!!!!!!!!

Thanks Stephen for reading! :)
Posted by Roberto Baly at 11:00 AM

What a jackass! Making fun of us? San Francisco has ZERO RINGS!

this guy, hahaha typical vagiant fans... theyre like our groupies, lurking in the shadows following our everymove... haha cuz their team is so horroble, they gotta go our OUR fan SITES and go to our city and try to get anything on us.... go back to san fagsisco..... go dodgers!

Stephen is just mad with our championships.

its cool that other fans read this blog.

p.s. this is a different jesus then the one that commented

The Dodgers Organization attracts fans from all over the place, even your blog has attracted this so-called Giants fan. Keep reading buddy, the Giants just lost 2 of 3 to the Padres (and let's not forget Manny's homer to give us 2 of 3 wins). The Giants Organization is done! Go Dodgers!!

They have a Jonas Brother pitching for them, so who is he to talk?

P.S. I'd really really like to see that Jonas Brother pitching for us in a few years. I've always wanted his jersey, just never had the heart to get it.

Poor Stephen, another misguided Giants fan. He does not even know that his is under the influence of the evil empire. Let's hope that someday he will see the light and join us in Blue heaven.

"The Dodgers are done!"