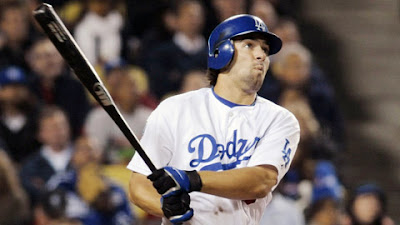 I had to get my Dodger news through my phone since I was at Dodger Stadium. Good thing for Twitter updates. Found out that Blake DeWitt will be the Opening Day second basemen and Charlie Haeger will be the 5th starter.

I'm just glad that DeWitt will get an oppurtunity to start and show his talent.

Michael Becker of the Press-Enterprise has the details.

He'd performed admirably during spring training, they explained, but not well enough to make the team's opening day roster. He would begin the season in Triple-A Albuquerque.

DeWitt, who was the opening day third baseman in 2008 only to spend the following year shuffling between Triple-A and the majors, tried his best to hide his frustration.

I wish there was a camera inside that room just to see DeWitt's face. That would of been classic. You really have to think if the Dodgers had already made a decision with DeWitt but wanted to wait till April 1 just to do this joke.

The Dodgers selected Charlie Haeger as their 5th starter.

"I feel like a little kid," Haeger said. "I just feel happy. It's like a dream come true. I've been waiting for an opportunity like this for a long time and it's finally here."

He had a solid start last night. The walks could get him in trouble though. I noticed Russell Martin was jumping up and down trying to get that Knuckleball. I'm not sure if it's Martin that needs experience in catching that pitch or if the Knuckleball was going all over the place.
Posted by Roberto Baly at 9:00 AM