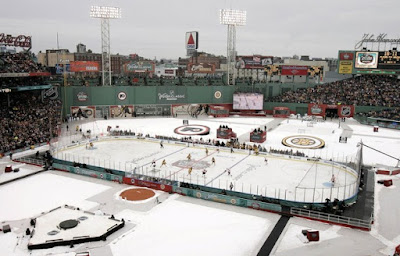 I think it's a great idea of the National Hockey League hosting a Game at a Major League Ballpark. The Winter Classic Game has been held for the last three years. All three were held on New Year's Day. The first one wasn't at a Baseball Stadium. It was held at Ralph Wilson Stadium, home of the Buffalo Bills. The last two were held at Wrigley Field and Fenway Park (last Friday) I did see some of the game on t.v. What a interesting concept of having Hockey Players playing outside in a Baseball Stadium. Fenway Park looked great. Boston must of been excited for this Hockey Game.

So I was thinking, what are the odds that Dodger Stadium hosting one of these Winter Classic Games? I'd say very slim. But you can always dream, right? Imagine the Los Angeles Kings playing at Dodger Stadium. 56,000 fans attending this game in a Sunny Day.

That's the problem. It's going to be Sunny. Most likely, they want the Game to be held somewhere cold. The Big League Stew Blog {linked here}had a post about this last week. They were writing about where the Game should be held in the future. If you read the comments on that blog, most fans wouldn't want the game to be held in the West Coast.

The NHL are going to be doing this every New Year's Day, so future sites will be discussed {linked here}. Football Stadiums might be in too. Not just Baseball Stadiums. If you think about Baseball Parks, you have to imagine Target Field (the new park of the Minnesota Twins) Yankee Stadium, Comerica Park (Detroit) PNC Field (Pittsburgh) are the front runners to host one of these Games.

One more shot of Fenway Park hosting this Game. Courtesy of Reuters. 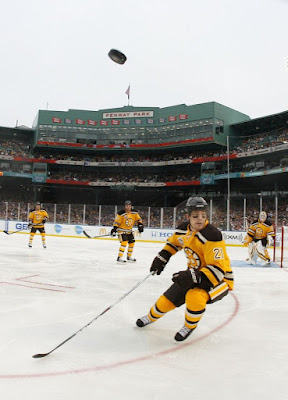 Roberto - I think it's a great idea. Hockey's popularity has declined over the years in this country. The sport has a fan base on the east coast and in the midwest. What better way to try and expand your fanbase than by having the game played on the west coast?

I feel the same way! I just don't see it happening in the near future. Plus I'm reading the Canadiens also want to be part of it. The Skydome (Toronto) ?

But yes, it would be great to do one in the West Coast.

Or maybe they'd play the game in the Olympic Stadium, where the Expos used to play.

I don't think so. From what I understand, the NHL wants to do it in a outdoor stadium. The Olympic Stadium is a Dome Stadium...

It will probably be a few years before they hold a winner classic game on the West Coast. I think the biggest factor is making sure they can sell out a large stadium for hockey. The last thing the NHL wants is a non-sellout for their marque event.

I do think, though, that a sell-out is a strong possibility (just not now) because of the rising stock of the Kings. They are playing great and are filled with some young talent at the NHL level and in the minors. Heck, their last 3 home games have been sell-outs. So, given some time to mature and a couple of playoff runs I think the NHL will eventually try to pull one off here.

Hey Ernest, you know more about Hockey than myself. I hope you are right :)

I think they should too!!! If they do have it here it is cool, but they can alwyas have it at night! THe kings played a gmae in vegas outside when Gretzky was with them.. it tunred out gret and that was vegas alot hotter then here!

Hey Mo, yeah I heard about the Kings playing a game in Vegas back in the early 90's...