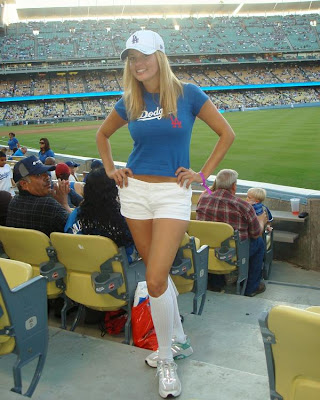 What's going on over at Sons of Steve Garvey ? Looks like they are having a intense campaign between the Sons.

I have to be on the side of Sax. Even though he thinks my name is Ronaldo, I have to support Sax because Orel has made a huge mistake !

This was a hard decision. I think Orel is a nice guy. He even sent me a message while I was Hospitalized last week.

But the bribe is not working. How can you post pictures of Dodger fans without their faces ? Are you telling your female voters that you don't care about their brains ?

Now if you had posted a picture like the one you see here, then the story is different and the bribe would of worked :)

By the way, that's Erika Garza, a Spanish T.V./Radio host and Dodger fan.

I would have shown their faces if I had them! But hopefully our female readers are paying more attention to Daniel Craig and Johnny Depp.

A fair criticism, though. Thanks, Ronaldo!

Roberto, you're the man! Thanks for the endorsement! I love VSIMH!

This isn't over yet! Voting doesn't start until Monday!

Ya gotta know, it's not just between Orel and Sax. The race also involves other Sons of Steve Garvey, some of whom make meaningful contributions to the site and others who...don't (e.g., Pedro and Lasorda). Orel and Sax are just two sides of the same boobie shot, which is appreciated. Look at them as sort of the president and vice president at the top of a political ticket.

And by the way, I'm writing in "VSIMH" since you posted the portrait of this fine lass.

Hey I sent you a message too!!! Don't forget about me! I even saw you at a autograph signing for Geroge Sherrill and know what car you drive. (wow that sounds like a stalker huh?)

Sax has my vote. Sax if you need any compromising photos made of the others. Give me a shout.

@ Dusty - Yes but really, don't you consider the other candidates like Ross Perot and Ralph Nader ? You can't take them seriously, can you ?