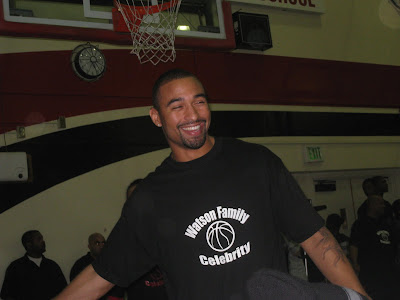 If you're on Twitter, you know what's up! Matt Kemp tweeted a upcoming Celebrity Basketball Game. I had to check this out since Kemp is always bragging that he could be in the NBA if he had continued playing Basketball instead of Baseball.

Everything happened last night. It was held in Westchester High School in Los Angeles. This event was done by the Watson Brothers. Marcus and Brandon do this every year to help out the community with a toy drive. Brandon is currently in the Arizona Diamondbacks organization. Their mission is to raise money to give out Toys to the community. The entry fee was $ 10 or a new toy.

The Gym was packed. I'm sure the event was a success. They brought a bunch of actors that to be honest I have no idea who they are. Maybe it was the B list. Besides the no name actors, a couple of Athletes were in the house. As mentioned, Kemp was there. Coco Crisp, who just signed with the Oakland A's was present. But the biggest star was Kevin Durant of the Oklahoma Thunder. He of course did not play. I'm sure his team wouldn't allow him to play a pick up game.

I took my Brother in law. Erik is fifteen years old so he was excited by all this. Before the actual game, the celebrities were warming up. This included Kemp, who shot easy lay-ups, Slam Dunks and three pointers. No joke, he can play.

Check out this video:

Slam Dunk! I shot a couple more videos. I'll post them later on.

Kemp sat in the side lines after his warm up and I told Erik to go up to him so he can meet him. He was nervous, it was funny. I told him to relax, that Kemp is a good guy. After he met him, he told me "Oh yeah, you were right, Matt Kemp is a cool guy!" Funny. 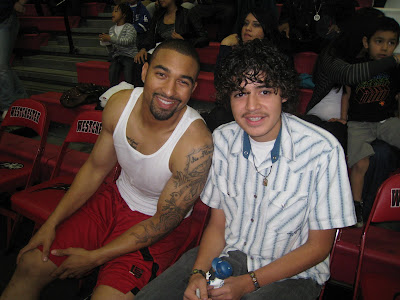 I told Kemp I shot his Slam Dunk and it was going to YouTube and he said "Tell everyone 'bout my skilllzzz!"

The actual game was fun. Matt's team lost 90-89. High scoring game with no defense and that includes Kemp! No one really played much defense. But who can blame them? No one wants to see these guys hurt, especially the Dodgers front office. 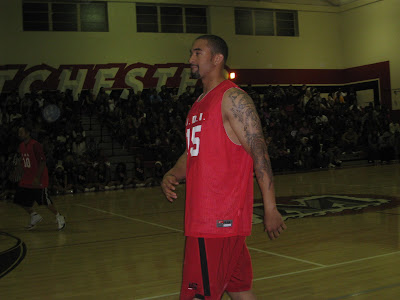 I know a couple of Twitter buddies that went. I'll ask them if they want to post their pictures here. Peace!
Posted by Roberto Baly at 1:00 PM