THIS IS MY TOWN: Black Eyed Peas

LOS ANGELES -- The Black Eyed Peas are demonstrating their support for the Dodgers as the club gets set to open the National League Division Series vs. the St. Louis Cardinals tonight. The Los Angeles-based group is featured on a "This is My Town" billboard, part of the team's advertising campaign that celebrates Dodger fan loyalty and conveys the message that Dodger fans can be anywhere in the World of Dodgertown. The billboard went up this morning at the intersection of Sunset Boulevard and Sweetzer Avenue on the Sunset Strip 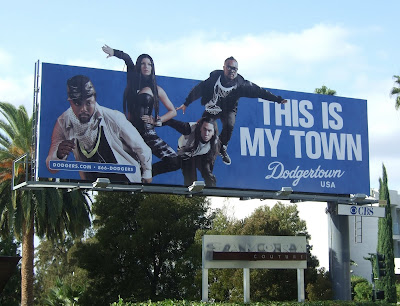 Email ThisBlogThis!Share to TwitterShare to FacebookShare to Pinterest
Labels: billboard, black eyed peas, los angeles dodgers, this is my town