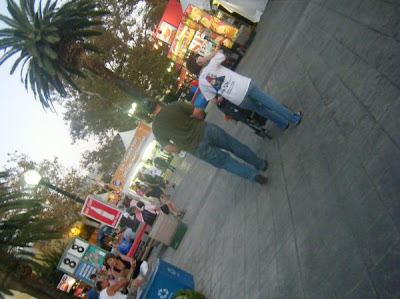 This story reminds me of the time I saw John Shelby and Brian Jordan with their families at Magic Mountain many years ago.

I don't know if you went to the fair on Thursday but i saw Jonathan Broxton with his wife. My girlfriend and I were walking and then girlfriend tells me look its Broxton and i was like what are you talking about i didn't get it till like 10 seconds later when she told me to look straight, He was with his wife and baby i didn't want to bother him and ask him for a autograph but since we were in front of him i smiled at his wife then broxton looked at me and just said hey to him and that was it lol. I wanted to tell him not to get in the direction he was headed because he was just walking like a normal guy nobody noticed him and there was a huge group of dodger fans where the signing was at and well i hope nobody bothered him for a autograph it was his day off and he was with family.
I attached i picture that i shoot from behind him.

Thanks Jesus for the e-mail. I didn't go to the fair last Thursday. And I did the same thing, when I saw Shelby and Jordan, I didn't bother them. They were with their families. I believe Shelby was the 1st Base Coach and Jordan was a Outfielder.
Posted by Roberto Baly at 8:00 AM