THIS IS MY TOWN: Kim Kardashian 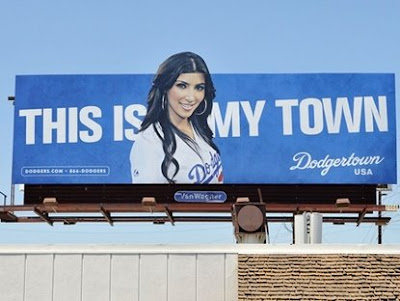 Say what? Kim Kardashian gets a billboard?

Where is Vin Scully?

Where is Jack Fimple?

Where is Rudy Law?

Where is Chad Fonville? (Don't know who Fonville is, huh?)

Ahh! How cool is my Dodgers billboard? I love it! It's a little odd to see myself on a billboard, but I'm thrilled to be the new face of the Dodgers and it's a real honor to represent my home team. Me, Kourt, Khloe and mom all went to a game recently to throw the first pitch and support the team!

Have you seen the billboards around town?

Who's next? Paris Hilton?
Posted by Roberto Baly at 12:00 PM

Email ThisBlogThis!Share to TwitterShare to FacebookShare to Pinterest
Labels: billboard, kim kardashian, los angeles dodgers, this is my town

So I heard that the Jonas Brothers are getting one! Let me know if you hear/find out anything about this! I don't know that would work though because there are three of them and I don't think they could all fit onto one! Haha

so this is real?!?! they actually have it around! crazy