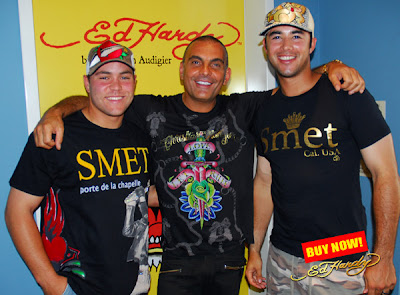 We have about a month to go for Andre Ethier, Russell Martin and the rest of his teammates to report to Glendale, Arizona. How cool is that ? Christian Audigier needs to put better designs and eliminate the "Smet" line. What kind of crap is that ? But I do like the "Ed Hardy" line. 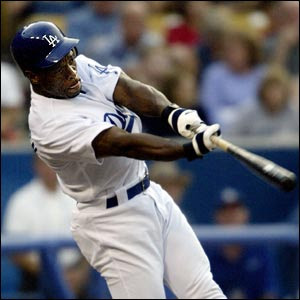 You forgot that he once played for the Dodgers huh ? In a couple of hours, Rickey Henderson will be announced as the newest member of the Hall of Fame. Will anyone else join him ? From the 2009 candidates, I think Bert Blyleven, Andre Dawson, Tommy John, Jim Rice, and Lee Smith should join Henderson. Of course it won't happen. I'm predicting Henderson and Rice get in. 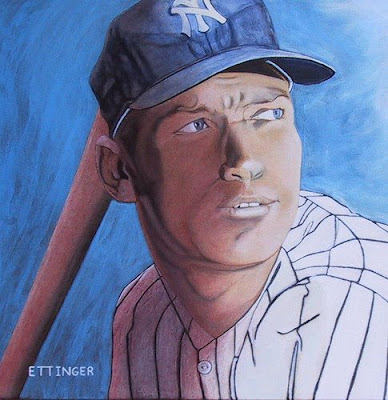 There are millions of pictures on Flickr. You can spend hours and hours just looking at pictures by talented people. Once in a while, I will post here the work of a Flickr member. Of course, only Baseball related. Just like I did a couple of days ago with Marc Gilbert and his stadium scales. This time I will present you the work of Jennifer Ettinger. She is a painter. You can view her art by clicking here. You can see over 100 drawings of Ball Players. Above is one of a young Mickey Mantle. 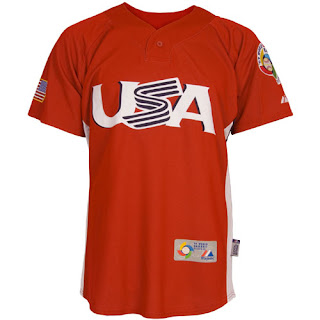 Don't you think this is a ugly jersey ? Couldn't they do a better job ? I'm not even sure what the color is. Well this is the official USA bating practice jersey for those that plays the World Baseball Classic. I like the home version. I also like the Dominican Republic Home Jersey. I don't like the Japan jersey. It's just too plain. I can't really rate the other countries because they have yet been released to the public. You can visit the WBC Shop by clicking here.

Over the last week I have been adding and subtracting objects of the left side of the blog. I also changed the color to white so it can have a clean version and easier to read. A couple of you e-mailed me about the blue color being to bright on their computer screen and hard to read. This looks better. Feel free to e-mail me if you have any suggestions. I'm open to anything. Also, if you are a expert on "Adsense" then shoot me a e-mail with any tips. Oh yeah before I forget, you can also comment on the blog even if you don't have a blogger account or a gmail e-mail. Thanks to all.

Rickey Being Rickey & Manny Being Manny

Jack Curry of the NY Times posts a article about the similarities of Rickey Henderson and Manny Ramirez. He has quotes from Dennis Eckersley and Don Mattingly.
“Rickey did his own thing,” said Eckersley, who was Henderson’s teammate on the A’s. “I never saw anyone like him. It’s like Manny being Manny. Rickey was Rickey.”
“Rickey was a lot like Manny, just in a different way,” Mattingly said. “He changed the game. Manny can do that, too.”
When Mattingly was Ramirez’s coach last season, he saw some of the traits he used to see in Henderson. Ramirez has the same type of plate discipline, work ethic and confidence. In addition, Mattingly said Henderson and Ramirez are both much more intelligent players than they are perceived to be.
Video of the Day: This is a funny clip. Jim Rome talks about Rickey Henderson.
Posted by Roberto Baly at 12:40 AM

Thanks for opening the comment box for everyone to use. I don't use blogger or gmail so I never was able to comment. You have something good here.

That video is funny. Rickey was one of a kind